Would you let your kids/parents/grandparents be injected with a COVID19 vaccine “approved” by the FDA?

The same FDA that lied about treating COVID with blood plasma and hydroxychloroquine?

How about the blood plasma scam? FDA chief Stephen Hahn flat out lied in public, claiming it “saved” 35% of COVID patients. Now the NIH has weighed in, refuting Hahn’s lies.

Now Trump et al want the FDA to issue an Emergency Use Authorization for a vaccine – something that has NEVER been done before, because it is incredibly dangerous.

Remember hydroxychloroquine? Touted as a miracle drug by the President, his Administration and allies, we know it is far more dangerous than helpful. And we knew that when the FDA gave it conditional use approval (that was later revoked).

Fox News on the FDA’s screw up… 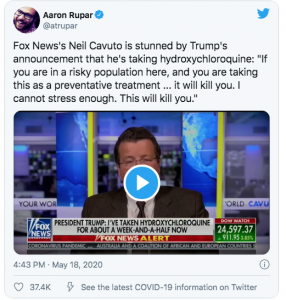 Both were touted as solutions to COVID19 – and both claims were proven to be flat out wrong.

Now we have that same FDA telling states to prepare for a vaccine that will be ready in early November. The Centers for Disease Control is also involved.

The Administration is turning the FDA – once the world’s leading scientific authority on drug approval, research, and guidance – into a political machine. Lesser known is that the FDA’s oversight of pharma and food safety has plummeted under Trump.

Without full vetting of a vaccine, we do not know if it will hurt us more than help.

If this was happening under a Hilary Clinton administration I’d be screaming bloody murder.