It’s been a bit busy this week; helping my sister take care of our mom in Maine.  Mom is 96 and ready to move on. She’s had an amazing life; grew up during the Great Depression, master’s degree at 21, ran the FBI’s fingerprint lab during WWII and worked for the CIA overseas in the fifties. Tiny, tough, and very, very smart.

Here’s what’s been happening this week…

Thoughtful post from Richard Krasner on medical cost drivers in workers’ comp. Richard’s dug into the recent NCCI analysis of medical cost categories; his take is inpatient hospital costs are a primary driver.

That makes sense for several reasons.

Which makes WCRI’s upcoming webinar on provider choice all the more important.

Following their study on the issue, the fine folk from Cambridge Mass. will walk us through what actually happens when employers or employees control the choice of provider. There’s a good bit of nuance here; it isn’t black and white.

HealthNewsReview has a great piece on a very questionable “research study” published by Proove Biosciences. Proove has been hyper-aggressively pursuing workers’ comp business; I’ll let HNR give you their view of Proove’s press release about a “study”:

[the] release summarizes a study showing that the company’s algorithm, which combines genetic markers with lifestyle and behavior variables, accurately distinguishes between healthy patients with no history of opioid abuse and patients receiving opioid addiction treatment. The study, however, may be comparing people with opioid use disorder with the wrong control group, given that a more useful distinction would be between those who have become addicted and those who have used opioids in similar circumstances without becoming addicted. In addition, the news release fails to provide information about the study’s funding source, nor does it note that four of the study’s six authors work for Proove. [emphasis added]

HNR goes on to state: this tool and others like it have been criticized for both reliability and questionable marketing practices.

Intriguing data on Medicaid patient access and satisfaction, from Axios… 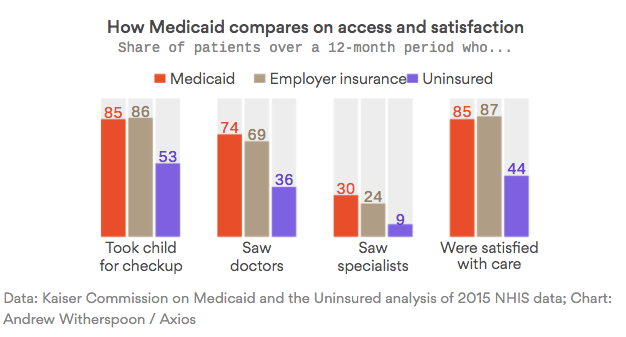 While you are spending time with friends and family this weekend, enjoying the extra day off and remembering those who made this possible, you may want to consider how fortunate we are.

Tom Lynch penned a piece in WorkersCompInsider about a Massachusetts worker who broke his leg in a construction accident. The guy fell off a ladder, but his employer didn’t carry work comp insurance. Did the boss get in trouble? No – but he did turn the worker into Immigration and Customs Enforcement, who threw him in jail. The victim in this has a wife and three young kids and, as you can imagine, is terrified.

So are his kids.

Have a great weekend.