Senate Republicans are set to release their revised American Health Care Act today – here’s what we know about their version, and what to watch for.

An excellent summary is here.

Medicaid – the biggest, most significant, and most important changes are to Medicaid.

74 million Americans are covered by Medicaid, and about 2/3rds of Medicaid funds go to elderly and disabled Americans.  Reportedly the Senate bill will:

As a result, more than 14 million low-income, disabled, and elderly Americans will lose coverage for nursing home care, rehabilitation, and all other healthcare services.

The mandate would be effectively repealed by eliminating enforcement. Today individuals and employers with more than 50 FTEs have to provide coverage or pay a penalty. Note – there has never been a requirement that employers with fewer than 50 workers provide insurance.

The Senate version reportedly has preserved some of the current income-based subsidy provisions, unlike the House bill.

Cloudy would best describe what we know about the Senate bill’s approach to ensuring people with pre-existing conditions are covered. There just aren’t enough details, however even if pre-ex conditions must be covered, it appears insurers will be able to charge much higher premiums for those with pre-ex conditions, and/or exclude treatment for those conditions from their insurance policies.

There are mandatory benefits in ACA; these would be eliminated in the Senate version, so your insurance plan might not cover mental/behavioral health and addiction coverage, and/or coverage for different types of care such as physical therapy or hospital services. While this provision would likely reduce premiums, it reduces coverage as well.

Tax changes and the federal deficit

All ACA-related tax increases are repealed with the exception of the Cadillac tax on high-value insurance plan, a change that will substantially increase the federal deficit.

There’s been far too little coverage of one of the most important impacts of AHCA – the loss of close to a million jobs if this is signed into law. While employment would increase over the very-near term, over the next few years it will drop as fewer people have insurance and thus can’t get care.

Millions of Americans will lose their health insurance, smaller hospitals will close, and cost shifting will explode as providers try to stay in business.

I don’t see the bill – in it’s current form – passing. But we are close to ACA’s death than we were a few weeks ago. 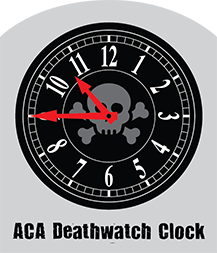