AARP has rather strange positions on drug prices and healthcare costs.

AARP positions itself as an advocate for seniors (and no, while I’m eligible, I’m not a member). The latest PR effort by the huge organization touts its lobbying to “help Americans afford high healthcare costs.”

Rather than lobbying for extensions on tax breaks for healthcare costs, AARP would serve its members better by doing something to actually reduce the cost of healthcare. Here are a few suggestions:

On this last suggestion, I’d note that AARP consistently moans about the retail price of drugs, while refusing to acknowledge the very real impact of rebates on brand drugs – which aren’t passed on to consumers.

AARP’s “research” doesn’t discuss rebates – and the fact that plan sponsors are getting rebates, which drastically reduces the prices those sponsors pay for drugs.

As a result, consumers pay the higher retail prices, while plan sponsors – AARP partners among them – keep the rebates.

(thanks to Adam J Fein, PhD, for his work on this.) 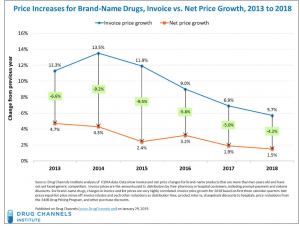 I emailed AARP, indicating my concern with this.  This was the response:

“While AARP appreciates the potentially distorting effects of rebates, evidence indicates that plan sponsors are sharing rebates with consumers in the form of lower premiums. For example, a recent CBO analysis of a proposal to eliminate rebates under Medicare Part D that found that premiums would increase for all enrollees and that federal spending would increase by nearly $200 billion, primarily due to increases in federal subsidies for premiums.

“Further, AARP has consistently said that it would be happy to run these analyses based on net prices. Unfortunately, no drug manufacturers have been willing to take them up on the idea.”

First, there’s a megaton of evidence out there that some individual/group health and Medicare Part D insurers are getting rebates, and are NOT passing them on to consumers.

Second, AARP could easily ask its “partners” (Part D plan sponsors among them) if they are getting rebates (which they are), and if so are they passing the savings along to consumers and what is the impact on those consumers’ drug costs. That would allow AARP to ” run these analyses based on net prices.”

AARP positions itself as an advocate for seniors. I’d suggest failing to address this is not helpful to their members.

Does AARP benefit from rebate payments? I dunno…