Having health insurance reduces your risk of dying.

Intuitively, this makes sense; you get cancer diagnoses and treatment, colon cancer screening, access to drugs and behavioral health treatment and flu shots.

You can read the details here, but the net is individuals who received a letter from CMS telling them they’d paid a penalty for not enrolling in health insurance were more likely to sign up than a control group that did not get a letter.

And, those who signed up had a lower mortality rate.

gaining coverage was associated with a 12 percent decline in mortality over the two-year study period (the first months of coverage seemed to be most important, presumably because people could get caught up on various appointments and treatments they might have been missing). [emphasis added]

This is the first conclusive, unequivocal research showing health insurance impacts your chance of dying.

From the Treasury Department’s study; the control group did NOT get the letter: 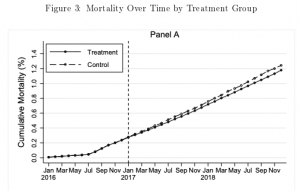 One can argue whether it is government’s role to provide or ensure coverage, one cannot argue this: more people will die due to this Administration’s policies.