Reality is, switching to a government-run and administered healthcare system would crush the economy – because millions would lose their jobs.

There are 22 million jobs in the US healthcare and related industries (that includes mine, one of our daughters, and her husband – they are nurses – our other daughter is in the tech business and one of her clients is a large health system; our son is also in tech and his company services medical practices.)

The private health insurance industry alone employs north of a million people. (data on this is spotty; UnitedHealthcare has 300,000, Cigna, Molina, Centene, Aetna and Anthem combined have over 180,000; there are dozens of other healthplans, PBMs, TPAs, and ancillary service providers.

On the provider side, there are over 700,000 management jobs (average salary is $86,000) and several million administrative jobs.

Many large hospitals and healthcare systems need several hundred workers just to handle billing and collections; these jobs would go away under a single payer system.

Let’s add all the college and grad school institutions that employ tens of thousands to educate people on healthcare administration, and the support infrastructure – IT companies, paper form printers, App developers, pundits and commentators, real estate occupied by insurers…you get the idea. The health care industry is at least a fifth of our economy.

If we switched to a true single payer system, millions of administrative, support, and related jobs would disappear. Remember what happened to manufacturing in the rust belt? That happened over 50 years; this would affect a much bigger share of the economy over a much shorter time.

The result would be an economic collapse that would surpass the Great Depression and devastate the economy.

Lest you think this is hyperbole, Taiwan employs a grand total of 300 people to administer a single payer healthcare system for a population of 24 million.

Using Taiwan as a basis, we’d only need 4,125 people to administer a universal single payer system. 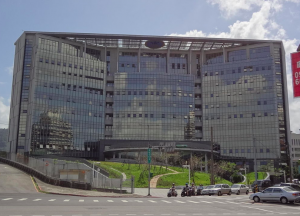 All of the people administering Taiwan’s health system work in this one building.

One thought on “Single Payer’s impact on jobs”