“Plan” is in quotes because as of now, it’s not legislation – just a list of programs and funding mechanisms that are very much a work in progress. It’s anyone’s guess if any legislation will actually become law…although as of now it seems a bit less likely.

Ed note – in my view the provisions of the legislation wouldn’t have much effect at all as they don’t address many of the core issues driving gun violence – except it would allow Dems to say they got a bill passed, and Republicans to tell independent moms that they care about kids.

Gun violence is a public health issue; it fits right into the purpose of public health, namely “reducing and preventing injury, disease, and death and promoting the health and well-being of populations through the use of data, research, and effective policies and practices.”

What’s appalling to me (a gun owner and hunter) is this: 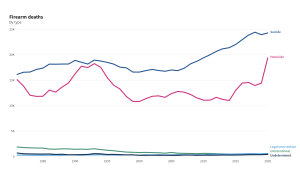 Yet most states do pretty much nothing to protect kids from gun violence – in fact in many states laws have been passed that increase the risk to children.

The holdup seems to be about two things; so-called red flag laws and the “boyfriend loophole”.

Red flag laws allow for/enable the temporary seizure of weapons and/or prevent weapons purchases by individuals deemed to be a danger to themselves or others. States with effective red flag laws have saved lives; “58 people who threatened mass shootings were disarmed during the first three years of California’s six-year-old red flag program. At least 12 school shootings were averted.”

GOP Senators are raising due process concerns; that is, they want to make sure individuals have their day in court before their guns are taken away.

More problematic is that there are 31 states without red flag laws; Sources indicate a GOP Senator assured his colleagues that “there would be no federal mandate to implement the laws”. Without that “mandate” the red flag provision would be pretty much toothless; states that have been busy making it easier for anyone to get and carry firearms wouldn’t be affected.

Sure those states wouldn’t get the federal funding needed to implement the red flag provisions, but elected officials would tout their willingness to refuse those dollars s evidence of their steadfast opposition to any gun control measures.

Behavioral health is how this affects health plans and payers.

All kids should be screened for BH concerns – no matter where they live. Care should be provided where needed. This will require additional funding, changes in benefit design for Medicaid, duals, and exchange/group health, and more behavioral health clinicians.

Of course this is politically driven…

Sen. Kevin Cramer, R-ND, on Tuesday. “I think we’re more interested in the red wave than we are in red flags, quite honestly, as Republicans and we have a pretty good opportunity to do that,” seemingly a reference to the possibility of Republicans taking control of Congress this fall.

Nice to see a politician publicly state that he cares more about votes than public safety.

Depends – do you have kids?

One thought on “Massacres, mental health, and the Senate’s “plan””