The chart below is from CompPharma’s to-be-released-momentarily 2016 Drug Survey; for the 30 payers surveyed (combined they account for just under a quarter of total work comp drug spend), drug costs dropped 8.7 percent in 2015. 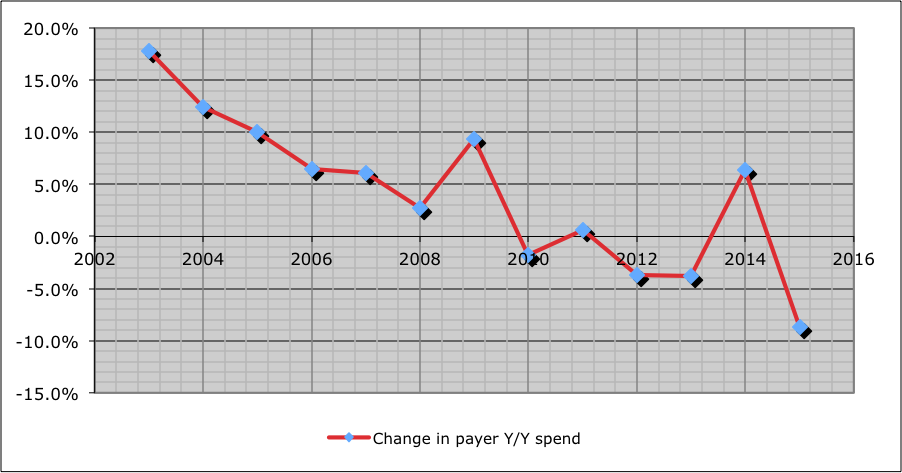 Work comp PBMs are Unicorns; incredibly rare and completely unique, their business model is based on reducing their revenue.  In a very small, totally mature industry, PBMs compete for payers’ business by showing how they will reduce drug costs, and especially reduce overuse of opioids.

What other business does that?

In addition, work comp PBMs do this without the economic levers of deductibles, copays, coinsurance, and tiered formularies that group health and Medicare PBM programs use.  In fact, non-work comp PBMs can’t fathom how they do this.

“How they do this” is thru a deep understanding of drivers, a willingness on the part of the PBM to eat the cost of drugs that a payer decides aren’t compensable or related, a lot of analytics to identify potential issues and problems, many well-trained people dealing with patients, prescribers, pharmacists, adjusters, case managers, attorneys, sophisticated clinical management programs.  All this is necessary, highly effective, and expensive indeed.

I bring this to your attention, dear reader, for a couple reasons.

First, on a per-pill basis, work comp drugs tend to cost more.  That’s because it costs a LOT more to manage work comp pharmacy than to manage group, Medicare, or Medicaid.

PBMs and payers are doing great work addressing a major driver of work comp costs and disability; below-break-even fee schedules will force them to become pure transaction processors, something employers, taxpayers, and patients can ill afford.

Note – I am president of CompPharma.