There’s a bill in the US House of Representatives that would greatly expand compounding, drastically reduce the FDA’s ability to oversee compounding, and eliminate many of the desperately-needed controls on this occasionally-deadly and often-abused practice.

Why anyone thinks this is good idea is beyond me, but someone convinced Rep. H Morgan Griffith (R VA) to write a bill and introduce it in Congress, and Rep Henry Cuellar (D TX) and others to co-sponsor Griffith’s bill.

That “someone” may have deep pockets.

Griffith has received over $100,000 in donations from “health professionals” and pharma entities; Cuellar got money too.

Griffith also got more money from the “International Academy of Compounding Pharmacists” than any other candidate for any Federal office.  The IACP has spent millions lobbying Congress to strip the FDA of authority and eliminate controls over compounding.

The IACP and other organizations are seeking to rewrite regulations issued after the New England Compounding disaster, a tragedy that saw hundreds of people sickened and scores killed by contaminated compounded medications. These medications were prepared and shipped by the NECC, a business in Massachusetts that happened to be located right next to a recycling center owned by the same family. 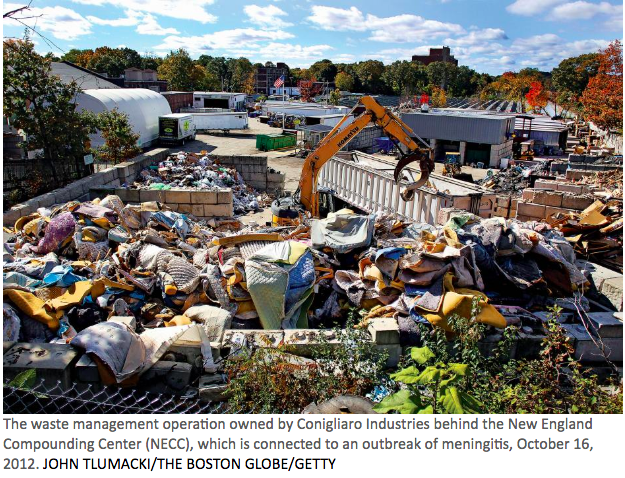 (This is relevant because ventilation systems were one of the problems identified by investigators looking into the causes of contamination in NECC’s products.)

The regulations were issued to implement a law passed by Congress in response to a Congressional inquiry into the disaster.

In a congressional hearing the FDA Commissioner was asked why regulators at the FDA and the Massachusetts Board of Pharmacy did not take action against the pharmacy years earlier. The legislators were told that the agency was obligated to defer to Massachusetts authorities, who had more direct oversight over pharmacies.

Yet Griffith’s bill would overturn many of the desperately-needed controls now in place:

The bill exempts from interstate distribution limits the dispensing of a compounded drug from the facility where it is compounded to a patient or health facility.

The bill eliminates the requirement for compounding pharmacies to register with the FDA as drug manufacturers.

As a side note, we’re seeing a dramatic decrease in compounds in workers’ comp, driven by payers’ refusal to pay outrageous charges for “medications” with no proven efficacy. In our annual Survey of Prescription Drug Management in Work Comp, respondents are reporting they paid for far fewer compounds last year than the year before.

That decrease could reverse if Griffith’s bill is passed, and we could well see a return to the days of poorly-regulated profit mills masquerading as compounding pharmacies.

Elections have consequences, and campaign finance laws are killing us.

8 thoughts on “Compounds – the stench of corruption”