A few years back an acquaintance called me to ask for help finding a job; s/he’d been let go after a merger.

While we had known each other for some time professionally I’d always found him/her to be hard to reach, not responsive, and somewhat arrogant. When s/he needed something, the expectation was I – and no doubt others – would respond fully and immediately.

Now s/he was reaching out for help. And again the expectation was a full and immediate response.

I attempted to gently inform the person that they were in a different position now, and would make a lot more progress – and get a lot more help – if they handled things a little more diplomatically.  I won’t characterize the response, as I may have misinterpreted it.

I sort of understand this; as a buyer, the person was used to being accommodated – if not outright fawned over – by vendors eager to curry favor. The golden rule applied – S/he who has the gold rules.

As I think back on this, I recall being in meetings with this person where vendors were told to improve results. When those vendors attempted to meet his/her needs by suggesting program changes, IT connection improvements, or different communications procedures, the answer was always the same – we don’t have the resources to do that, that’s your responsibility, you figure it out.

The net is this.  Buyers do not help themselves by bossing potential vendors around, being unnecessarily difficult, demanding, unrealistic and dictatorial. And, often vendors can’t meet certain objectives unless the client pitches in as well. Sure, every payer has limits, resource restrictions, and budget constraints, but expecting a vendor to deliver data to your system seamlessly, consistently, and accurately while refusing to upgrade your technology to allow that is not only unrealistic, it is certain to fail.

That’s on the business side.

On the personal side, individuals who conduct themselves this way may well find things change when they no longer “have the gold”. Their calls go unanswered, references aren’t provided, job leads not shared.

Many vendors have excellent ideas they’ve learned from working with other payers, ideas that can make your program more effective, efficient, impactful. Ask them what you can do to better work together.

And remember the real golden rule – 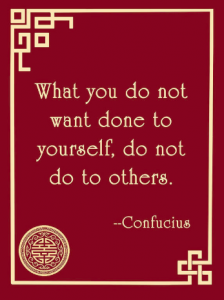 9 thoughts on “The Two-Way Street”