Work comp and auto payers in many southeastern states have seen a sharp rise in facility costs over the last five years.

While ineffective fee schedules are partially to blame, the real driver may well be politicians’ refusal to expand Medicaid.

When Medicaid expansion was offered in 2014 as part of the ACA, most states took advantage of the option, resulting in a massive decline in uncompensated care. However, the ACA also reduced federal payments to hospitals in tough financial shape, the rationale being Medicaid’s expansion would reduce the need for additional funding.

Not surprisingly, the cost of uncompensated care dropped dramatically in states that expanded Medicaid.

Equally unsurprising was the increase in the cost of uncompensated care for those states that didn’t expand Medicaid.

In the chart below, the gold bubbles in the top right show how much the uninsured rate increased, correlated with uncompensated care’s share of hospital costs. 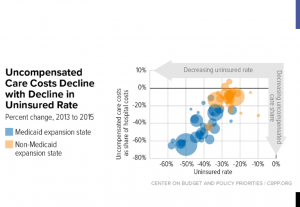 So, we have a massive revenue shortfall in non-expansion states; Florida, Texas, Georgia, South Carolina, and others, setting up pretty dire financial situation for hospitals.

What does this have to do with workers’ comp, you ask? 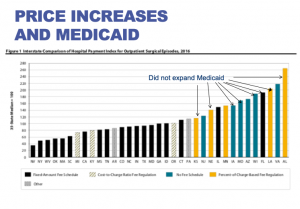 The reason is simple. Hospitals, especially those in southeastern states, rural and small ones, are desperate for revenue, and workers’ comp is a very soft target.

If you think you’ve got the right answer for facility costs, you’re probably wrong.