It’s time to dig back into how and where COVID is affecting workers comp. As this is very much a state-specific situation, we first need to understand what’s happening around the country.

(if you just want key takeaways, scroll to the bottom)

For starters, it can be quite difficult for a worker to get coverage for COVID; in most cases a worker must:

Tests were hard to come by – and many were inaccurate – back in the initial March – to – May wave. Presumption laws have been a moving target and are subject to interpretation, as is the determination of who is – and is not – an “essential worker”.

States’ data below are NOT directly comparable; states report things differently and totals are from different time periods. For example, Florida’s data includes only lost time claims that have been accepted or denied. California, Hawai’i, and New York include all claims filed. Can’t tell much from PA’s data…

Remember, occupational disease is NOT handled the same as an occupational injury; in laymen’s terms, in most cases the burden of proof is on the patient to show COVID was contracted in the workplace and not at home.  This from Florida statute:

“occupational disease” shall be construed to mean only a disease which is due to causes and conditions which are characteristic of and peculiar to a particular trade, occupation, process, or employment, and to exclude all ordinary diseases of life to which the general public is exposed, unless the incidence of the disease is substantially higher in the particular trade, occupation, process, or employment than for the general public.

CWCI’s reporting of COVID and related data is timely, robust, and accessible. As of November 30 – 2 days ago – there were 56,854 claims reported. Almost 19,000 were among healthcare workers and 7,700 suffered by public safety and government employees. 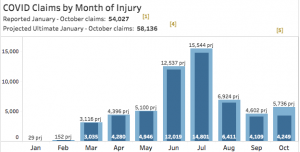 A lot of claims incurred in November aren’t included in those figures as they aren’t officially reported yet. So, looking at projections for the period ending October 31, CWCI projects there will be a total of 58,136 COVID claims.

68.1% of claims that have been assessed have been accepted, a rate higher than in most other states.

Overall, claim counts are down 12.9% for the year; that’s a loss of one of every eight claims.

Over 12,000 COVID-related claims were filed, as of October 8,  the vast majority still pending.  To date, about 8,000 of the claims filed are lost time, 184 are receiving indemnity payments and another 5,000 claimants received “voluntary” wage replacement payments from insurers/their employer.

Around 1,230 claims were initially denied…and again, about 3/4ths are still pending.

On the other side of the country, only about 400 claims have been filed in Hawai’i through October. About half were initially denied, and most are still under consideration. Not surprisingly, a plurality (166) were from healthcare or social workers.

As of October 31, the Sunshine State has accepted or denied 23,000 COVID-related lost time (LT) claims filed, 13,000 have  been ruled compensable and the rest denied. Key findings include:

Our friends on the border reported 25,571 claims as of September 27, 2020 – the vast majority have not been accepted or are still being adjudicated. Similar to other states, Texas’ data indicates an early peak in April followed by a much higher one in July. Notably there are no data for the last two months. 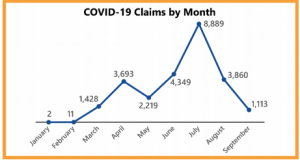 Although Texas’ Division of Workers’ Compensation refers to the reporting entities as “insurance carriers”, the data actually include self-insured employers’ results.

There are a bunch of other states reporting COVID claims, a vast improvement over what we had earlier this year. However, the different criteria used, different timeframes, different claim types and data provided make it difficult to get a clear picture of just how many claims have been reported, accepted, and denied; how many are med onlies vs lost time, how costly they are and on and on.

2 thoughts on “COVID and workers’ comp…where are we?”