The prices private insurers have paid to hospitals and physicians have increased much faster than prices paid by Medicare and Medicaid. 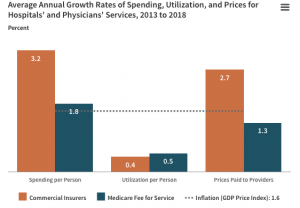 And it’s not because providers are cost-shifting.

Those are the main takeaways from a just-released CBO report; here’s what CBO said (emphasis added):

Ok, that said, these are findings based on national data…things are different market to market.

I’d note that price increases in workers’ comp correlates with states’ Medicaid expansion. That is, price inflation is generally much higher in states that did NOT expand medicaid.

More on that here.

What does that mean for you?