My last post covered the first five of my annual prognostications; today we look a bit deeper into the crystal ball…

6. California’s crooked docs will be outed.

With SB 537 signed into law, it looks like we’ll know which docs are the bad actors later this year. Kudos to the behind-the-scenes folks who made this happen; thanks to them we’ll know the name of the PM&R doc in northern California who filed IMR requests resulting in 2,800 IMR letters and 4,441 Medical Decisions.

(while the law doesn’t require this outing to happen before 2024, I’d expect we’ll know the names of the worst offenders in 2020.)

Word of warning – network providers would be well advised to do their own research to identify and remove problematic providers before the list becomes public. Failing to do so will show you’re just a box of contracts.

7.  More effective approaches to chronic pain and opioid abuse disorder are here – and will gain a lot of traction in 2020.

Behaviorally-focused treatment, medication-assisted therapies, long-term clinical support and individual-specific treatment plans are all essential to solving the biggest problem in workers’ comp – chronic opioid use disorder [OUD]. Payers are recognizing that discounted-network approaches to pain and OUD are nothing more than revenue-generators for vendors. Carisk’s Pathways 2 Recovery is getting significant traction; Paradigm is shifting to more of a behavioral approach as well. (Carisk is an HSA consulting client).

Significant change doesn’t happen unless there is a lot of pressure to make that change. And there isn’t – With workers’ comp anything but a problem for employers and insurers, constituents aren’t pressuring legislators to take action and regulatory activity will be mostly clean-up stuff. 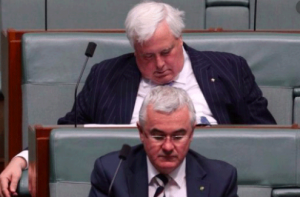 Word of warning – beware of folks hyping relatively minor stuff like medical marijuana. Compared to the California crisis and Illinois’ past work comp disaster these issues are pretty insignificant.

9. Benefit adequacy will gain some traction.

I’ll admit this is much more of a hope than an actual prediction. 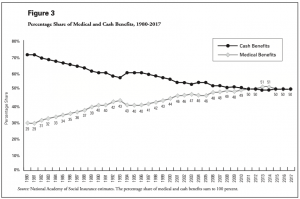 As reported by NASI, worker benefits have declined dramatically over the last two decades. Sure, some of this is due to the drop in frequency, but workers are getting less in benefits than they have in the past – and that’s bad by any measure.  It’s great that employers’ costs are declining, but that shouldn’t be at the expense of injured workers and their families.

With employers’ work comp costs at an all-time low, it’s long past time we focused on making injured workers whole.

This does NOT mean I support the self-described “worker advocates” who make their living off injured workers. If anything these leeches do more harm than good.

10. Conferences will continue to struggle

The work comp conference industry is suffering from over-supply; as a result many conferences are seeing drops in attendance, revenues, and exhibitors.

For some conference planners, the fix is pay-to-play.

While a possibly-useful short-term fix [pay-to-play generates much-needed revenue and profit] the long-term impact will be to further reduce the value of conferences.

Another “solution” is to require each session include an employer, ostensibly to provide real-world examples that other employers can use to improve their programs. The problem with this is obvious; while it will drive more attendance from brokers, TPAs and insurers, it doesn’t deliver much value for other employers. Here’s what I said back in August..

I can’t count the number of times I’ve heard “well, if I had a thousand workers in XYZ city I could negotiate with an occ clinic too”, or “how do I apply that to my interstate trucking company” or “yeah that’s not going to fly with my unionized workforce”.

That said, conferences put on by CWCI, NCCI, WCRI and those focused on self-insureds are content-rich and well worth your time.

That’s it for this year – may you do well by doing good.